www.howtoeat.net Let us know what you think about table manners. 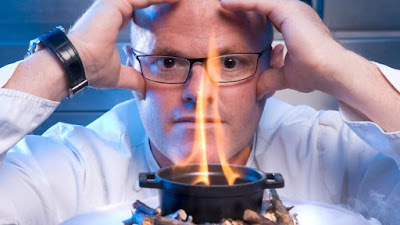 Heston Blumenthal is known for pushing the boundaries of fine dining but one trend is not to his taste. The chef has spoken of his irritation at diners picking up their phones to photograph their food for Instagram before lifting their cutlery.

Blumenthal, 53, said that people were becoming “disconnected from the moment” by the desire to chronicle their lives online. “Social media is such a big part of our lives,” he said. “Our sight has become almost the more important sense than smell or taste.”

His comments are intriguing given that he has built his reputation on exotic dishes and been described as a culinary alchemist. Creations include snail porridge and a nitro-poached mousse.

He is considering asking customers at the Fat Duck, his restaurant, Berkshire, to stop photographing their food. “Whenever anything becomes really popular, the potential for the negative comes in,” he told Radio Times.

The restaurant is one of five in Britain with three Michelin stars. He also owns two pubs in the Berkshire village, and Dinner in Knightsbridge, central London, which has two Michelin stars.

He said he had been “very tempted” to ask diners at the Fat Duck to refrain from snapping photographs. “We did it once in Australia because somebody was taking pictures with a flash, which affected other tables.” He is reluctant, though, to reprimand paying guests. “We’ve debated this for several years now,” he said. “If we say to people, ‘Your food’s going cold,’ you put up a barrier between you and the diner.”

Perhaps patrons can be forgiven for wanting a memento of their food when a meal for two at the Fat Duck costs £650, excluding drinks, and the restaurant is booked up months in advance. Despite the prices, accounts filed last April for Snail Porridge Ltd, the parent company of the Fat Duck, his TV business and other interests, showed losses of £1.7 million.

Blumenthal, who lives in France with his second wife and their toddler, told Radio Times: “If I see something beautiful like a sunset, I try to be in the moment, then take a picture afterwards. A lot of people now are more interested in capturing a photograph so they can post it, which disconnects them from the moment.”

Despite the chef’s concerns, photo apps give restaurants such as his, serving eye-catching dishes, free publicity. More than 17,000 Instagram posts have the hashtag #thefatduck.

Blumenthal has taken up meditation and tai chi and bought an electric mountain bike since a diagnosis of attention deficit hyperactivity disorder in 2016. “The thing about modern life is we’ve got more choice than ever and it affects our ability to decide,” he said. “The more things there are, the more distractions there are.”